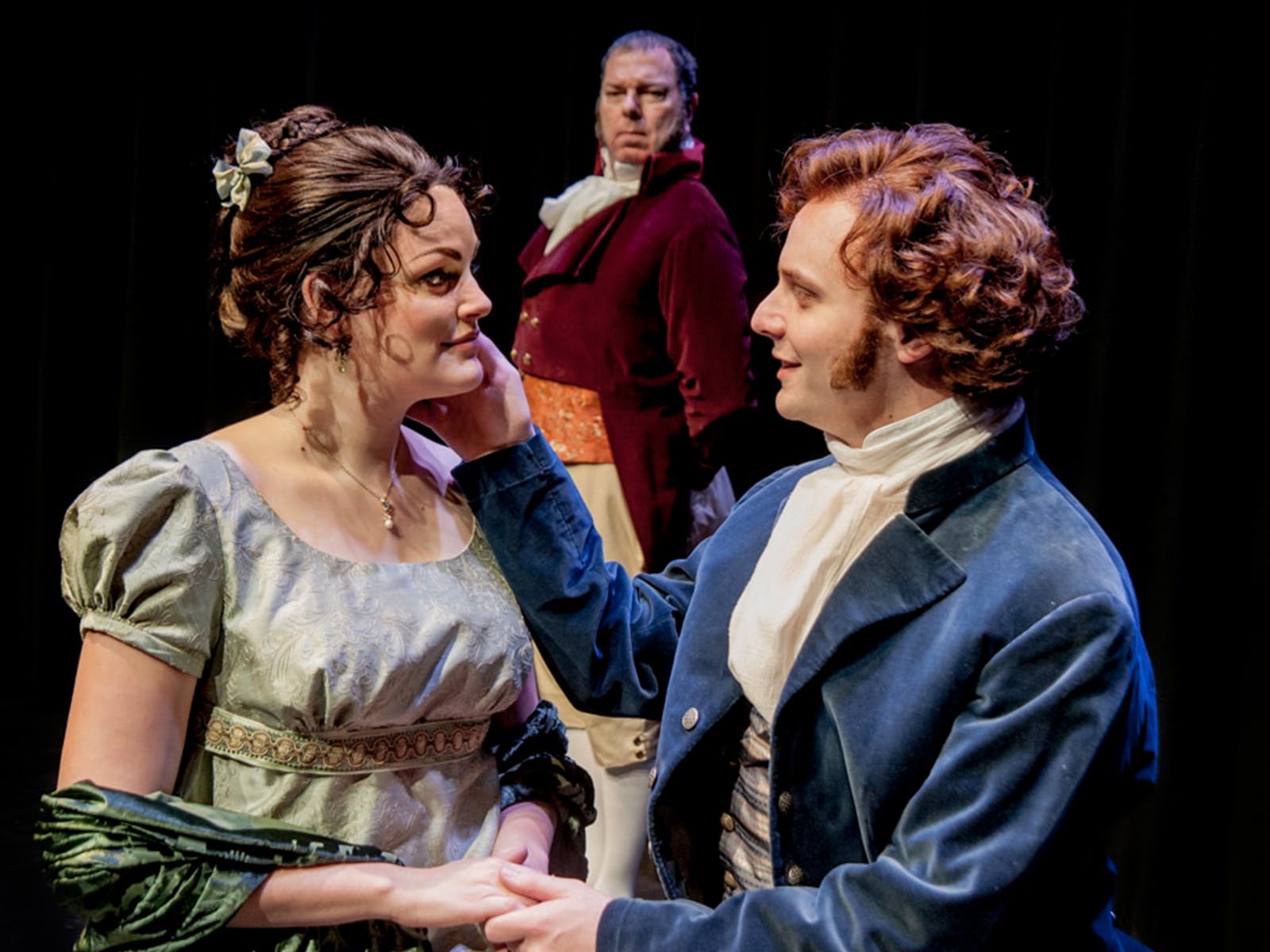 “She had been forced into prudence in her youth, she learned romance as she grew older—the natural sequel of an unnatural beginning.”

I’ve encountered three reactions from those who learn we’ve adapted Jane Austen’s final complete novel Persuasion as a musical. The first is delight. This comes from people who hold certain Austen adaptations near and dear to their hearts … usually the 1995 BBC miniseries of Pride and Prejudice starring Jennifer Ehle and Colin Firth. The second is indifference. These souls were forced to read Austen in high school and tend to confuse her with Charlotte Brontë. The third is dread. These are Janeites who anticipate a chorus line of naval officers high-kicking atop a painted reproduction of The Cobb in Lyme Regis.

Let me reassure, and perhaps disappoint, everyone: our musical does not feature zombies to attract a teen audience, will not turn Captain Wentworth into an Iraq veteran to show social relevance, and will not relocate Act II from Bath to Havana as an excuse for a climactic mambo. We chose to musicalize Persuasion for a simple and perhaps naïve reason. We believe that if any art form can be true both to the novel’s wit and to its aching melancholy, it is musical theatre … not the musical theatre of spectacle but of emotional immediacy and intimacy.

Virginia Woolf noted that Persuasion marked a departure for Austen: she was trusting dialogue less and reflection more, lingering on passing seasons and painful memories. The novel is set in a period of limbo in which all appears pacific and yet conflict looms: primarily autumn 1814 to late-February 1815, after Napoleon’s initial capture and before the carnage of Waterloo. Anne Elliot is Austen’s oldest protagonist and views the world with a wisdom hard-earned by past mistakes. Anne is never “saved” by Captain Wentworth; she is “seen” by him and appreciated for who she is and has always been. Their happy ending is satisfying not only because they stand together as equals, but also because they are mature enough to realize how rare, fleeting, and precious happiness is.

There is a Zen-like quality to that line: to love is to know the fear of loss. And of course, a year after completing Persuasion, Jane Austen herself was dead. 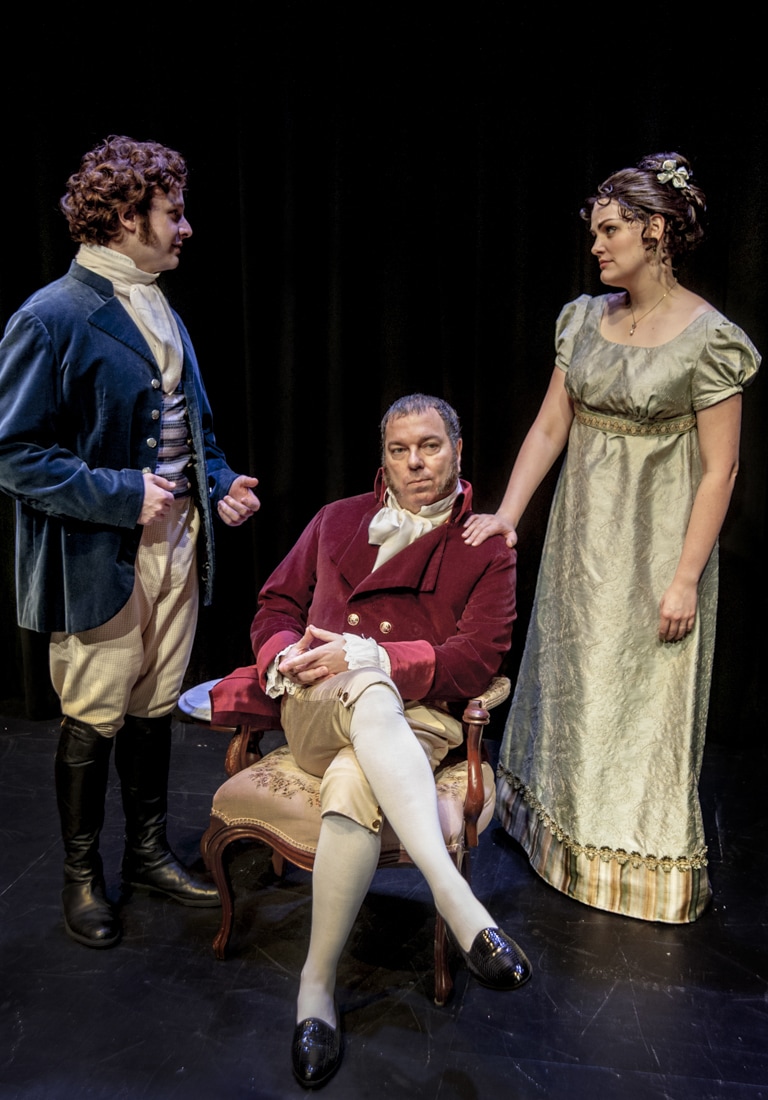 At first glance, it may seem an odd choice to adapt for musical theatre a novel as nuanced as Persuasion, given that most of the “action,” aside from a country walk and a fall off a seawall, occurs inside Anne’s head. But all adaptations are acts of translation. And the musical is as close as one can get to a native language for translating what is vital and beautiful in Persuasion.

Don’t misunderstand me: Persuasion is not static. It’s a thrilling journey, but one made by the heart.Music is the heart's compass, pointing us toward the true north of submerged grief or tremulous joy. Anne and Captain Wentworth are immersed in mutual nostalgia, unable to let go of regret to embrace the present.

Is there a better vehicle for reliving nostalgia and regret in the here and now than song? It is an axiom in musical theatre that when a character’s emotions become too overwhelming to speak aloud, she must sing. Throughout the novel, Anne and Captain Wentworth scrupulously hide their passion from themselves and each other. But in counterpoint and harmony, they can lose and find each other again. =

We hope that our musical adaptation of Persuasion will, like the novel, allow audiences to experience the vast emotional distances one must travel to appreciate the beauty and fragility of life and love. If we are successful, any augmentation with bells, whistles, or swords will be unnecessary. Nothing could be more exciting than lingering for a few suspended musical moments in Jane Austen’s last, fully realized landscape.

Get your hands on a copy of Persuasion

Harold Taw is a novelist and the co-author of Persuasion: A New Musical (book by Harold Taw; music and lyrics by Chris Jeffries), which has its world premiere at Seattle’s Taproot Theatre Company from July 12 to August 19, 2017. For more information, and to hear the original piano demo recordings, go to http://www.persuasionmusical.com. Listen to the song "Prologue" sung by Cayman Ilika here Listen to the song "Only Anne" sung by Cayman Ilika and Matthew Kacergis here